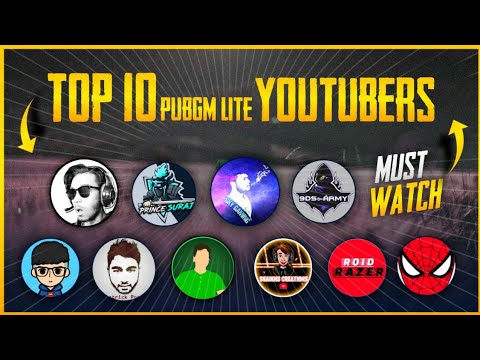 There are many countries across the world which has a list of the players best in various mobile games like PUBG. Just like all these countries India has also witnessed the list of players who has quite interesting skills when we start to talk about the game of PUBG. The gaming industry is blessed by these players with more and more titles and extraordinary playing techniques.

These players are from all age range are in the top list of the gaming influencers watched as well as followed by many young players as the guides. There is one platform that has contently supported all these gaming influences from the very beginning of this unappreciated career choice as per many people around us. The platform has provided then the independence to create their content using almost anything. YouTube can be described as one of the most used platforms for streaming the gameplay. The gamers who enjoy these streams can to this whole day long as per their comfort level. Also, as YouTube is free the people or I can simply say the game fans can watch the game stream whenever and where they wish to do so.

Also Read: How to create Custom Room in PUBG Mobile and List of countries withdrew the ban on PUBG mobile

Also Read: List of best PUBG weapons and How to add Friends on pubg mobile lite

Here we will start from the bottom to the top list:

This is the tenth name in the list when it comes to the mobile PUBG gaming. The scribers to this channel are about 0.22 crores which is, of course, a huge number. This player has made his name in the list due to his excellent gaming skills. He not only streams the games like PUBG but is also a content creator with all his excellent video in the channel named as Razknee Show. In. Thie channel is also followed by a huge number of people. The channel is been appreciated by YouTube platform many times.

The second last person who has quite a famous name when we talk about game streaming is known as ScOut. This channel has around 0.32 crores of subscribers. He is a unique Mobile PUBG player known to be a pro. Apart from this name he is often being called as the game influencer among his fans. The list of famous YouTubers of India in the gaming world will be declared incomplete if his name is not mentioned in that.  the excellent comments and next level playing have made this YouTuber quite famous worldwide.

The third last name in the list is Gyan Gaming. He is also popularly known with his nickname GyanSujan. This channel currently has around 0.58 crore subscribers. The owner of the channel was able to get half of his subscriber during the first three years as the PUBG game streamer. The fan base is quite huge and crazy behind his tactics and ways to play. There have been even great support from the YouTube platform towards his channel.

The next name in the list is of the two side gamers. This YouTube channel is owned by two players known as Jash Dokha and Ritik Jain. Both the players are extremely talented when it comes to mobile PUBG like games. They have around 0.65 crores of subscribers to date and still counting. They have been streaming popular game like PUBG and Free Fire since the tear 2017. Apart from this they also get a great number of views for some viral video people to love to watch.

The next name in the list is of a mortal. This person is also a core member of the PUBG mobile pro team soul and is also famous for his great moves in the game. The channel has the subscribers count of about 0.68 crores and is considered one of the significant streamers of India. After the game of PUBG was a ban in India the gamers started playing other games like COD, Free fire etc. In streaming all these games there too he got a great response.

He is not as famous as compare to all other players but still has the subscribers count of about 0.66 crores on his channel. He is also quite famous in the Indian gaming community. The channel is also ranked on top of some excellent lists popular on the web. The fan base appreciates the player for his excellent skills and extraordinary playing style.

Apart from all the players listed above, there are some other players who are quite famous for their excellent gaming skill in PUBG and other games too. This includes desi gamers, Carryislive tec. I hope the article was useful to all my readers.