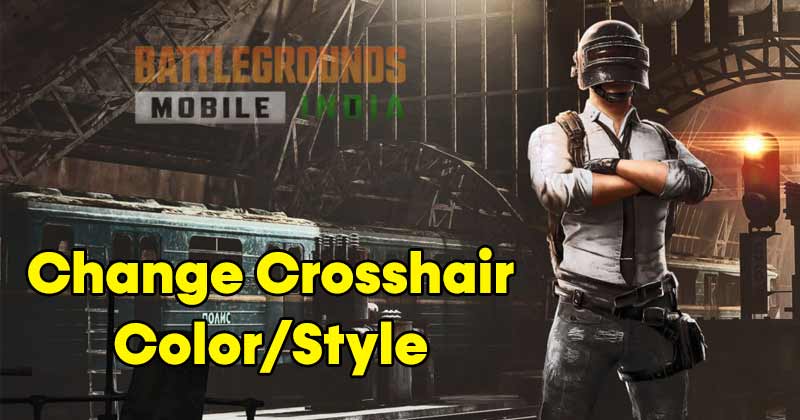 How to Change the Crosshair Color in BGMI

Finally, the game of PUBG has made its comeback in India with a new name as well as an awesome theme that is only for this country in specific. The Indian version of PUBG is known as BGMI which is the short form of Battleground Mobile India. The game has already been made available on the Google play store and the players can easily download the game for free. This new version OF PUBG has many things included in it which is identical to the older version as those features are termed as the global edition feature that in most of the cases remains the same. Apart from this, the developers have also made some relevant changes been to comply with the Government of India rules. For example, the colour which was earlier used for the hit was earlier red but now it has been changed to green.

Also Read: How to get an Invitation Code for PUBG Beta and How to enable 90FPS in PUBG Mobile

There is even a virtual game reminder been the setup of the players for their convivence time to play which just work as an alarm and of course, there are plenty more features been added that players will find quite interesting to explore as well try. There is even the option to change the hit colour as per the choice of players through the settings. But the red colour has been removed from the choices. This same thing is even implemented with the change of crosshair colour in BGMI. Well till now you must have already understood that this whole article is going to be about Crosshair colour change in the Battleground Mobile India (BGMI). So, if you are interested to know the process in a much easier way that can be followed easily without any complex step encountered in between then kindly do read this article till the very end. Now many of you must be having some basic questions in mind so let me start the article by clearly those doubts at first.

Also Read: How to Download BGMI on Windows with Gameloop? and BGMI Pre-registration link

What is Crosshair in BGMI?

Well, the definition goes something like this: A crosshair is nothing but your lines or dot that is present at the Centre of your screen. This point or line helps the player to determine the exact you have to fire using the weapon. So, if this dot is likely to present on some other player, then it is confirmed that the player is likely going to hit the enemies when it shoots. Apart from this, there are a bunch of factors which are taken into consideration such as they bloom. However, there is always a chance that the bullet spread will take place or even recoil will cause the weapon used to miss the hit.

There is something important that the players are required to know which is that a colourful as well clear crosshair will provide the players with good contrast between the crosshair and its respective such as the surroundings nearby. The colours that are been advised by some experienced players are white or blue. This is mostly because these colours are easily visible to the players and will help them in having an accurate difference between different objects been lying in the surrounding.

Now moving further let’s explore the whole procedure through which the change in crosshair can be made.

Step-by-step procedure to change the Crosshair in BGMI

The tutorial is very simple to follow so kindly read each step carefully without missing any of the points in between:

Step 1: The first thing that the player is required to do is to launch the Battleground Mobile India on your respective device.

Step 2: After this just tap on the arrow button that is been located in the bottom right corner. Kindly find and proceed further.

Step 3: Then you would encounter a sidebar that will start appearing from the right. kindly tap on the setting option present in the sidebar.

Step 4: Now on the setting page tap on the scope button which is made available

Step 5: After this, you would be able to see so many scopes options available in front of you. From the list select the one that you want to change the crosshair within the BGMI game.

Step 6: Just after this there is plenty of option available to choose the variety of Crosshair from the right side. The style of Crosshair can even be changed through this method too.

Step 7: After this, you are required to modify the settings for the holographic such as the Canted, 2x, and 3x scope.

Also Read: How to recover lost PUBG Mobile Account and How to Disable the Group Photo Option in PUBG

I hope the information been shared above will be useful to all my readers reading out there.