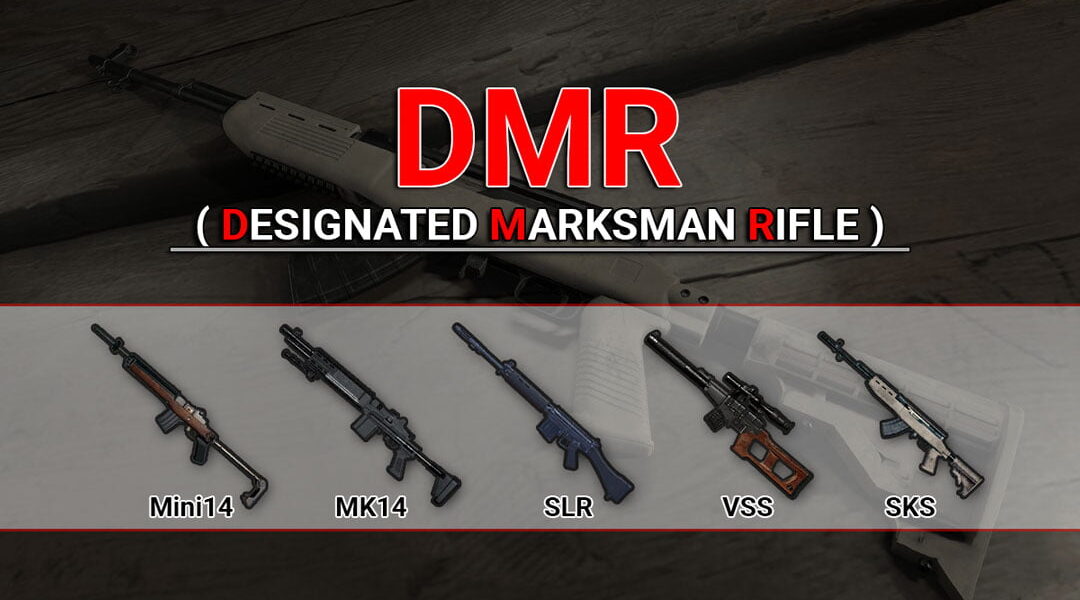 The game of PUBG Mobile is quite popular worldwide and all this is possible due to a lot of factors. Recently the game known as a player unknown battleground is known more commonly by its acronym. Also, the PUBG game has helped a lot of players to overcome boredom during the covid-19 lockdown situation. The game also has been downloaded more than 600 million times around the globe and with the active player daily engaged with the game crossing about 14 million players daily. The game of PUBG mobile was officially launched on 19th March 2018 and with the Launch, it featured a lot of weapon categories like AR (Assault Rifle), Bolt Action sniper rifle and DMR (Designated Marksman Rifle), etc. are the few popular once widely used by a lot of active players. Apart from this, the DMRs fill the gap between the AR and the bolt action sniper rifles in the PUBG Mobile game. There are around six types of DMRs available in the PUBG Mobile game. Some of these are available on almost all the maps but in the case of a few which are only available in the selective maps. However, one this that should be kept in mind that the configuration of these weapons is both from the drop as well as from normal floor loot. Till now you must already know that the topic that we are going to discuss today is DMR guns in PUBG mobile. So, if you are someone looking forward to knowing more then kindly read forward.

DMR or Designated Marksman Rifles are some the few weapons that help the players to fight a close combat situation as well as help them in a stealth situation when there is no enemy seen nearby but you can target with a much faster end that within seconds your enemy will end up losing his or her life. Thus, it would not be wrong to say that this is the only weapon that can do the job of both assault rifle as well as the job of a mid-range sniper. These DMR guns are not snipers in real life however they can be semi-automatic, bust fire, or even an assault rifles the thing that makes these weapons quite different from all others weapons is that it has a long effective range and accuracy as compared to other assault rifles being used in the game. Now let’s move forwards and look at the few DMRs used within the PUBG Mobile game.

Here is will be providing you with all the required information about the DMR guns of the PUBG Mobile. So, let’s start without wasting any more time.

Mini 14 is nothing but a semi-automatic rifle that originated from the United States around 1973 and the manufacturer was strum, Roger and co. This weapon is lightly weighted that uses a type 5.56mn ammo. This even deals with maximum damage out of 90 meters and that damage continually decreases beyond a particular point where it reaches its minimum value past 420 meters which would be less effective. The particular type is mainly found on the floor loot of Eragnel, Miramar as well as Vikedi maps and this takes 5.56mm calibre bullet. This is one of the most used weapons by many active pro players in PUBG mobile. This can be effective for both minimum as well as long-range battles and sometimes can even be used in close range battles when no other option is available. Other important details are:

SKS is also known as Samozaryadny Karabin sistemy Simonova. This is a DMR which is mainly found across all the types of maps used in PUBG Mobile game. This gun is quite effective and uses about 7.62 mm calibre bullet. The DMR SKS is a strong weapon mostly used in mid-range as well as close fights. Due to high recoil, it is quite harder to control this weapon in long-range battles. Moreover, this DMR can take in most of the attachments which makes it an effective weapon in almost all kind of battles. Well, SKS is a higher skill cap gun as compared to mini-14. This is the reason it is considered only by pro players to carry around in their fights. For usual players, this is not that much considered as these players prefer guns with lower recoil which are quite easier to be used. Other details are as follows:

SLR in here stands for self-loading rifle which is mainly found in all the maps of the PUBG mobile game. This is more like an advanced version of SKS as like SKS the SLR in here also uses a 7.62 mm calibre bullet along with few other similarities quite noticeable. While in SLR the recoil is higher as compared to that in SKS. Even that the damage done is compared to SKS. When we see the bullet speed than it’s more than SKS which overall makes the bullet drop lesser than that of SKS. The weapon is more effective that is for sure if the player has time to bring down the recoil. But unlike the SKS the SLR has no foregrip present here. This gun is good for the Miramar map of PUBG mobile as that is a larger map and the long-range fights are more common on this map.

I hope the information shared above will be useful to all my readers.